To reform drug addicts is our social responsibility – Khanna 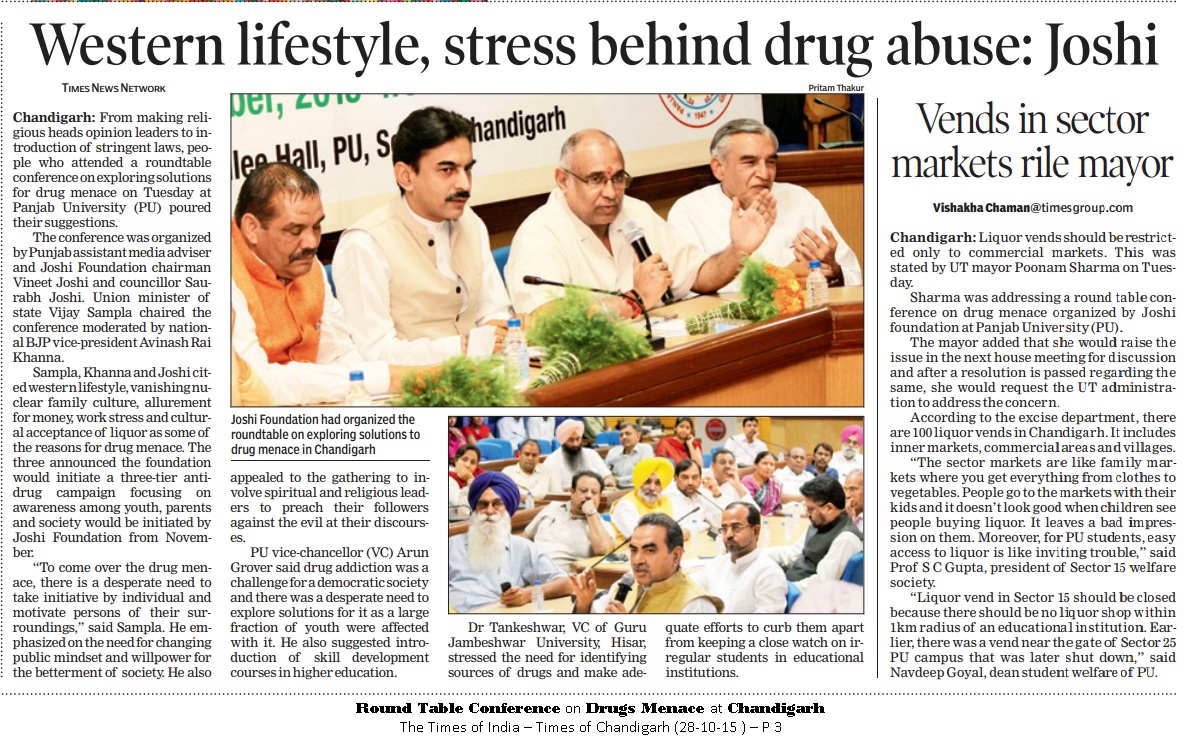 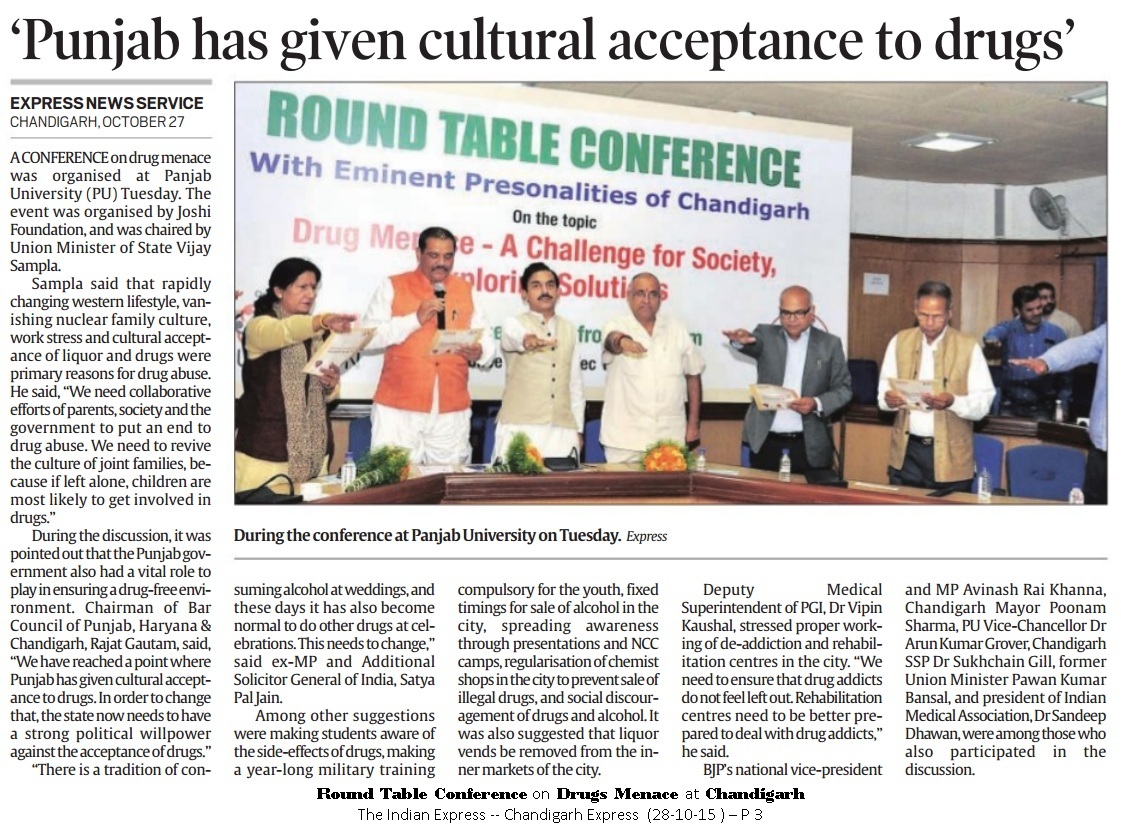 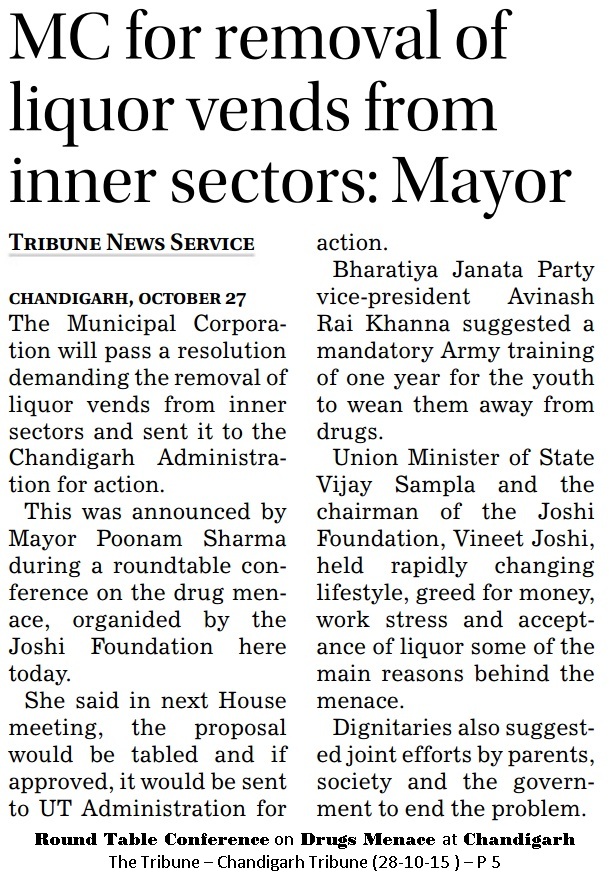 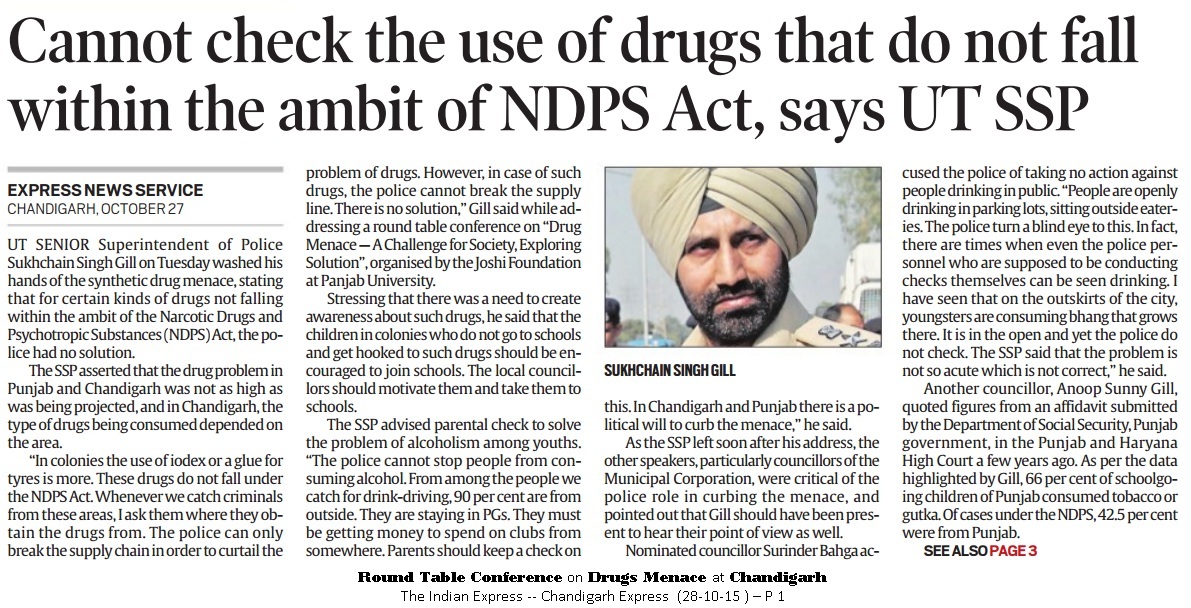 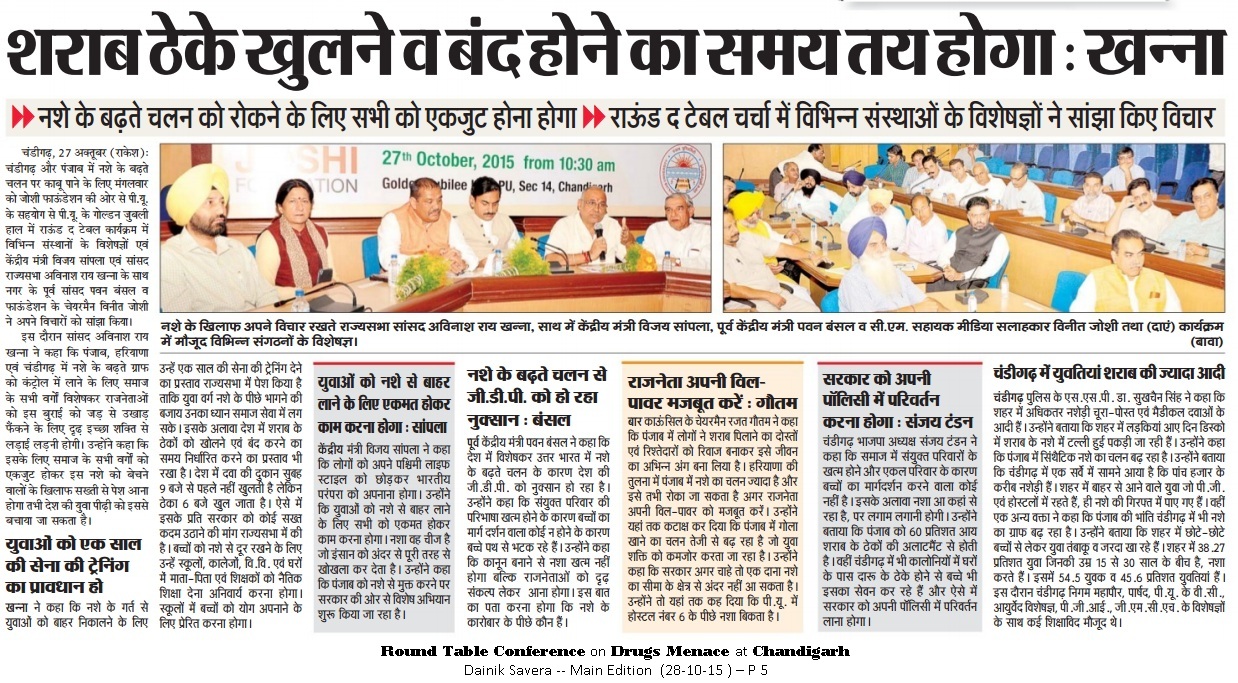 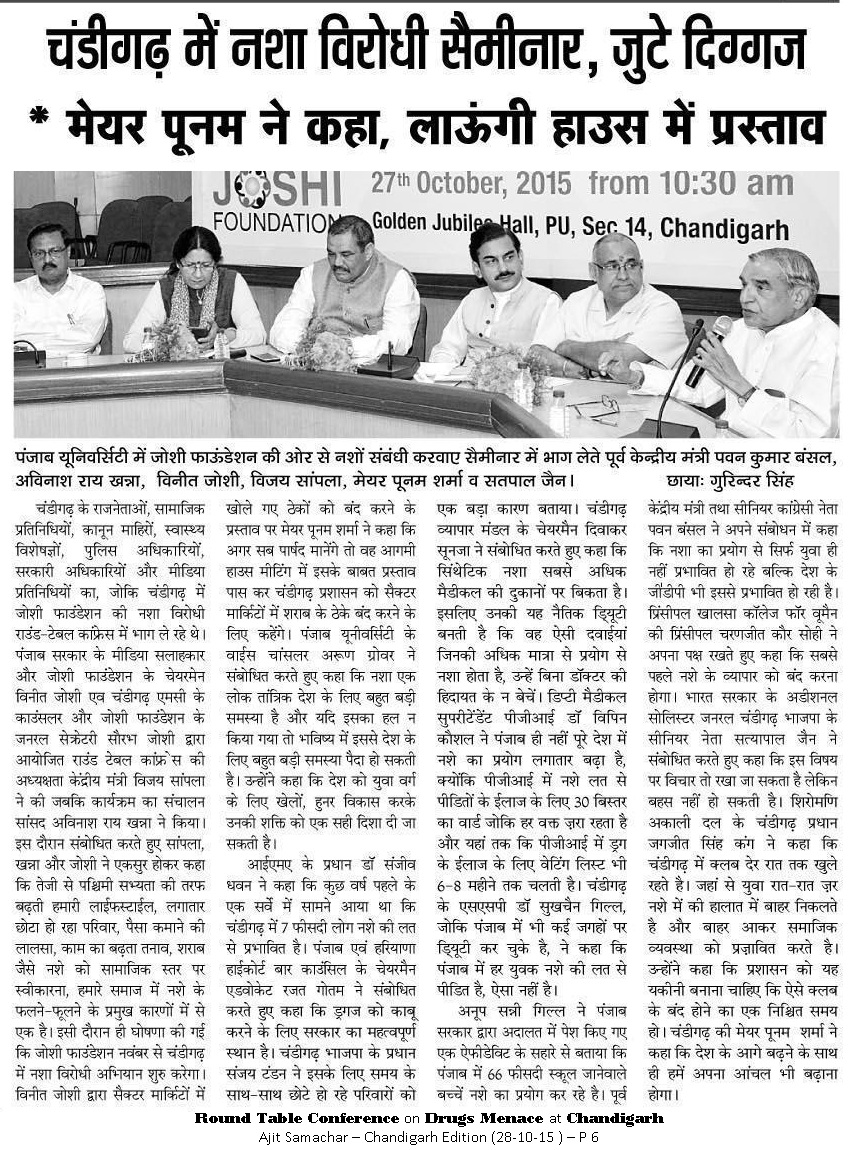 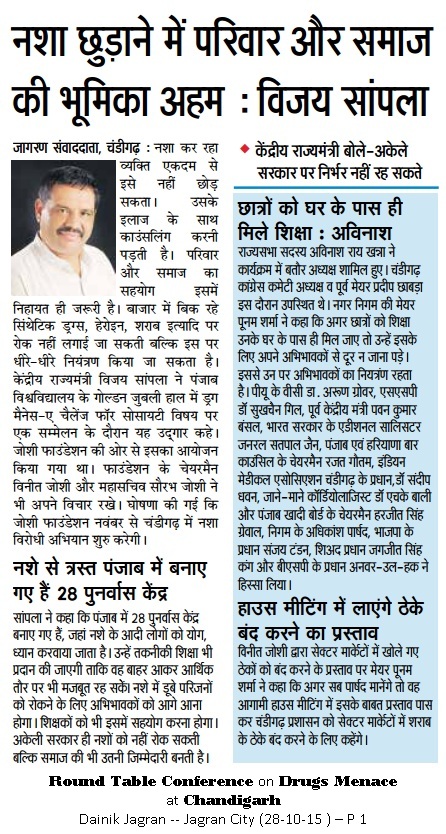 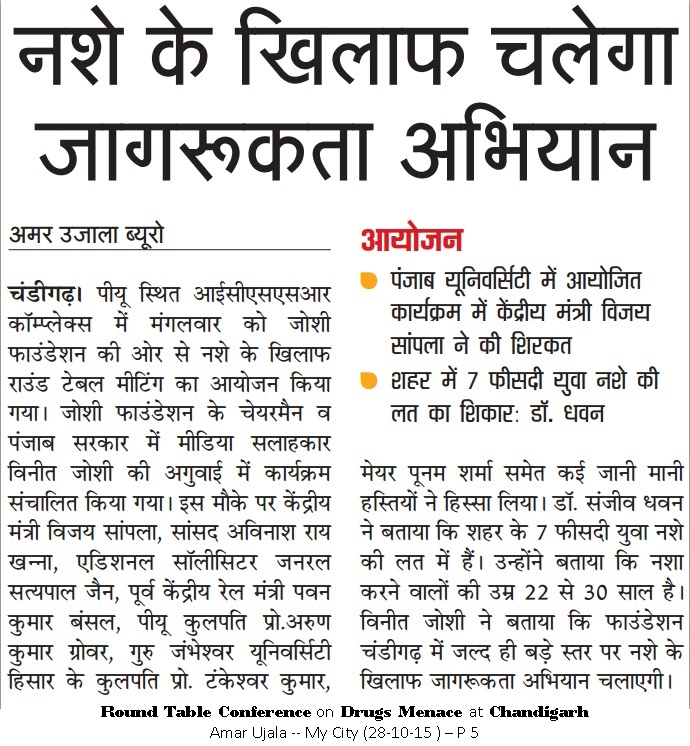 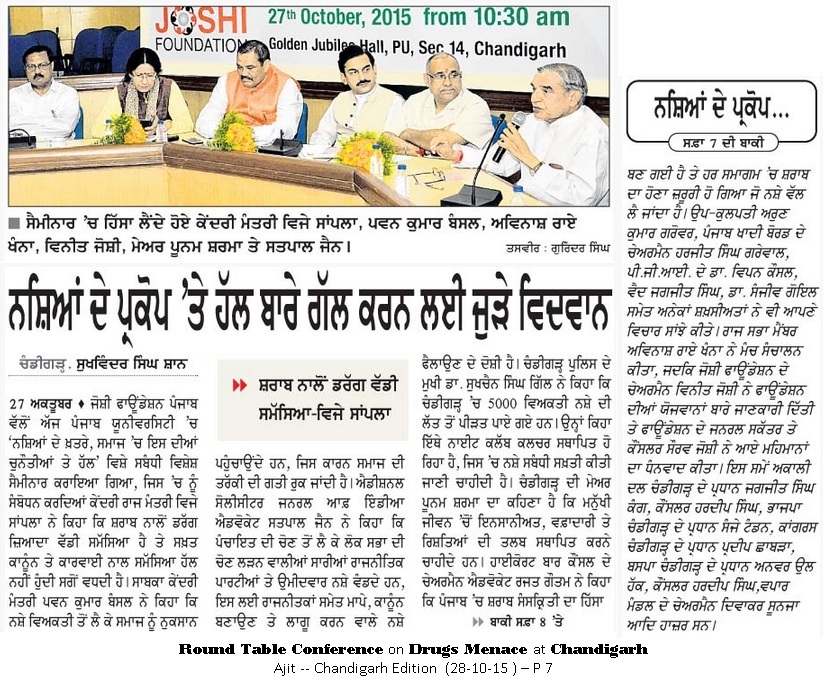 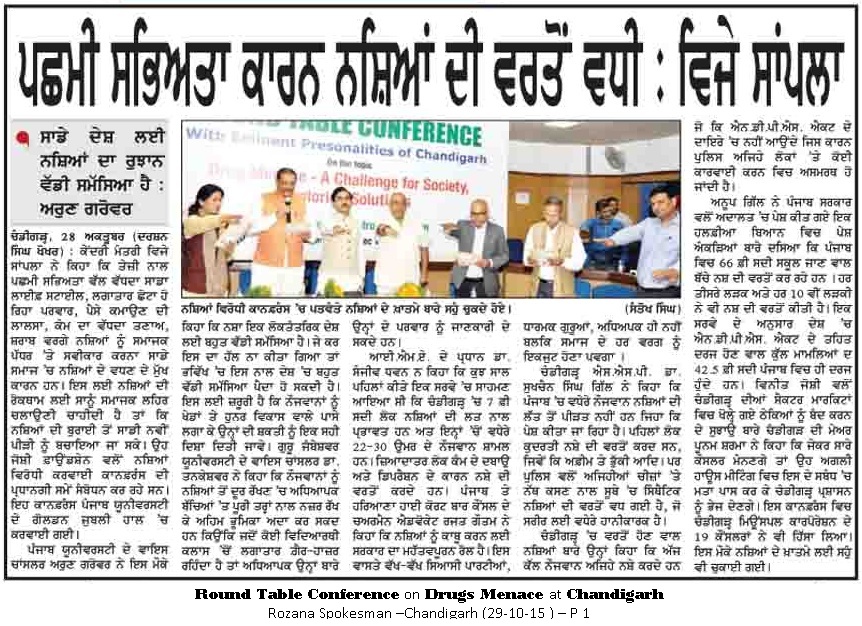 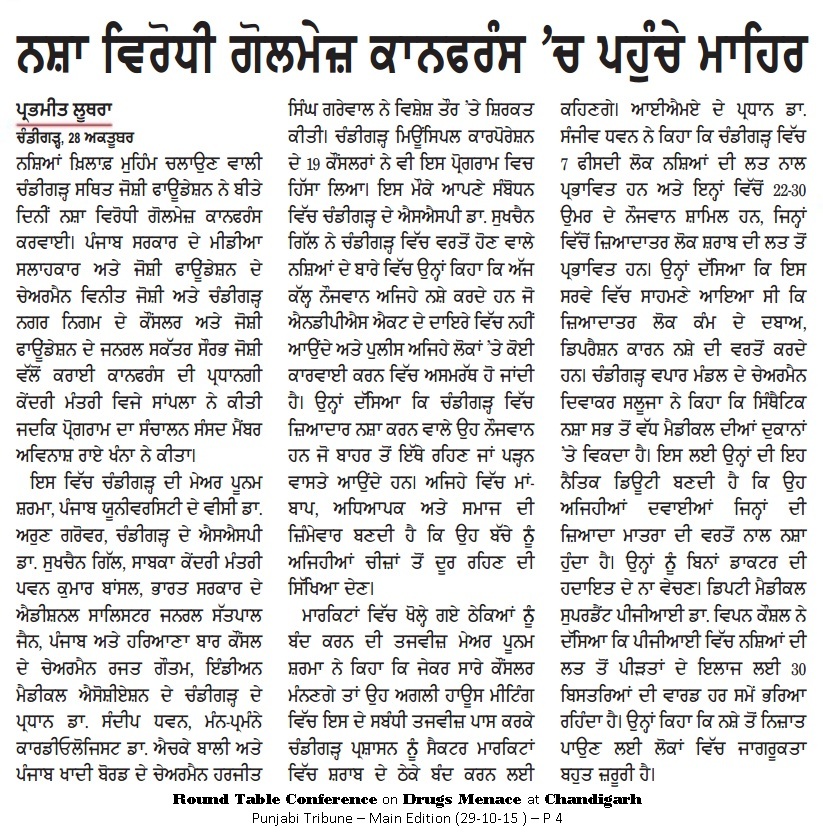 Collaborative efforts of parents, society and government could only help in controlling the spiraling  menace of Drug Abuse in Chandigarh, opined Academicians, Politicians, Society Leaders, Legal Luminaries, Medical Professionals, Govt Officials and Journalists who brain-stormed at a Round Table Conference organized by Joshi Foundation here today at Chandigarh.

Sampla, Khanna and Joshi held the rapidly changing Western lifestyle, vanishing nuclear family culture, allurement for money, work stress and cultural acceptance of liquor, as some of the main reasons for this fast spreading evil in this part of the region. A three tier Anti-Drug campaign focusing on awareness among youth, parents and society will be initiated by Joshi Foundation from November 2015, announced trio.

Accepting the proposal of Vineet Joshi, Mayor Poonam Sharma announced that in the next house meeting, if house agrees a unanimous resolution demanding removal of liquor vends from inner sector markets will be passed and sent to Chandigarh administration for action at their end.

Khanna who moderated the conference, claimed to have suggested solution to this  serious issue in the Parliament by demanding introduction of mandatory army training (one year)  for youth.

Arun Grover, Vice Chancellor of Panjab University, said that the drug addiction was a challenge for a democratic society and there is a desperate need to explore solutions for it as a large fraction of youth were affected with it. He also suggested introduction of skill development courses in higher education.

Dr Tankeshwar, VC of Guru Jambeshwar University, Hissar, stressed on the need for identifying sources of the drugs and then make adequate efforts to curb them apart from keeping a close watch on irregular students in educational institutions. The authorities should channelise their (students) energy by motivating them towards sports, yoga and other activities.

Rajat Gautam, chairman of Punjab and Haryana Bar Council, raised a real issue that Punjabis have given a cultural acceptance to ‘drinking’ and substance abuse and politicians who are the role models for the society are the front runners of this sin. He suggested that until the politicians determine to remove the ‘drug-devil’ with a strong willpower nothing could be done in this regard.

Sukhchain Singh Gill, Senior Superintendent of Chandigarh Police, disclosed that good number of the alcoholics in the city are female. Chandigarh, being an educational hub, has a large number of young population which is way from parents and so are vulnerable to substance abuse. An Anti-Drug awareness among them is most needed.  He, however, claimed that the situation was not so alarming as reported in the media.

Former Union Minister Pawan Kumar Bansal claimed that despite various laws to curb the menace, there is a strong need to enforce them strictly. He said that the drug-terrorism nexuses needs to the broken for a healthy and bright future. “Drug addiction is a disease that needs to be treated sympathically,” said Bansal.

Dr. Charanjit Sohi, Principal, Khalsa College for women, Sector 26, Chandigarh, was of the opinion that there was a need to develop society support system for keeping a close watch on children to keep them away from his menace.

Senior BJP leader Satpal Jain, Additional Solicitor General of India, appealed the gathering make the campaign against drug as a mass movement and rope-in education institutions to create awareness among youngsters about the consequences of the drug abuse.

Anil Sharma, treasurer Northern India Regional Council of ICAI, raised an interesting point that the union government should encourage development of  “Drug Free Cities” at the pattern of Smart City concept, one of the dream projects of Prime Minister Narindra Modi.

“To come over the drug menace, there is a desperate need to take initiative by individual and motivate persons of their surroundings. He emphasized on the need for changing public mindset and willpower for the betterment of society struggling against the drug additions,” feels Vijay Sampla, Union Minister. He also appealed the gathering to involve spiritual and religious leaders to preach their followers against the evil at their discourses.