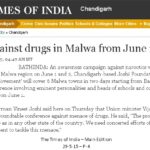 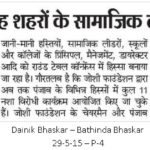 Round Table Conferences against drugs on June 1 at Bathinda, Sangrur, Budhlada and on June 2 at Abohar, Malout and Gidderbaha

Chandigarh-based Joshi Foundation’s Quit and Kick Drug Movement – a mass awareness initiative against drug addiction to make Punjab drug free – would be in Malwa on June 1 and June 2. The two day six city anti-drug tour will cover Bathinda, Sangrur,  Budhlada on June 1 and Abohar, Malout and Gidderbaha on June 2. As an initial step the foundation is organising round table conference of eminent personalities/ society leaders/ principals/management/ directors of prominent schools and colleges at Bathinda. The Joshi Foundation has already organized eleven anti-drug mass awareness programs in Punjab so far.

Announcing this here today, the chairman of Joshi Foundation Chandigarh and the assistant media advisor to Government of Punjab, Mr Vineet Joshi said that the round table conference is in continuation with the Joshi Foundation’s battle against drugs with collective efforts of society. He said that the Union Minister for State Mr Vijay Sampla and him himself would jointly chair the event. Chairman, Khadi Board, S. Harjit Singh Grewal and Chairman Punjab Infotech S. Manjit Singh Rai will accompany them.

Talking about the menace of drug addiction, Joshi said that the problem of drugs addiction was not limited to any geographical boundary. “The problem is as serious in Punjab as in any other state of the country. At Punjab, this awakening has dawned on society that policing alone cannot keep drugs away. We need concerted efforts of family, society and the government,” he said.

0 0 0 0 0
Previous : Dasuya Meeting Regarding Drugs Issue
Next : Next Post