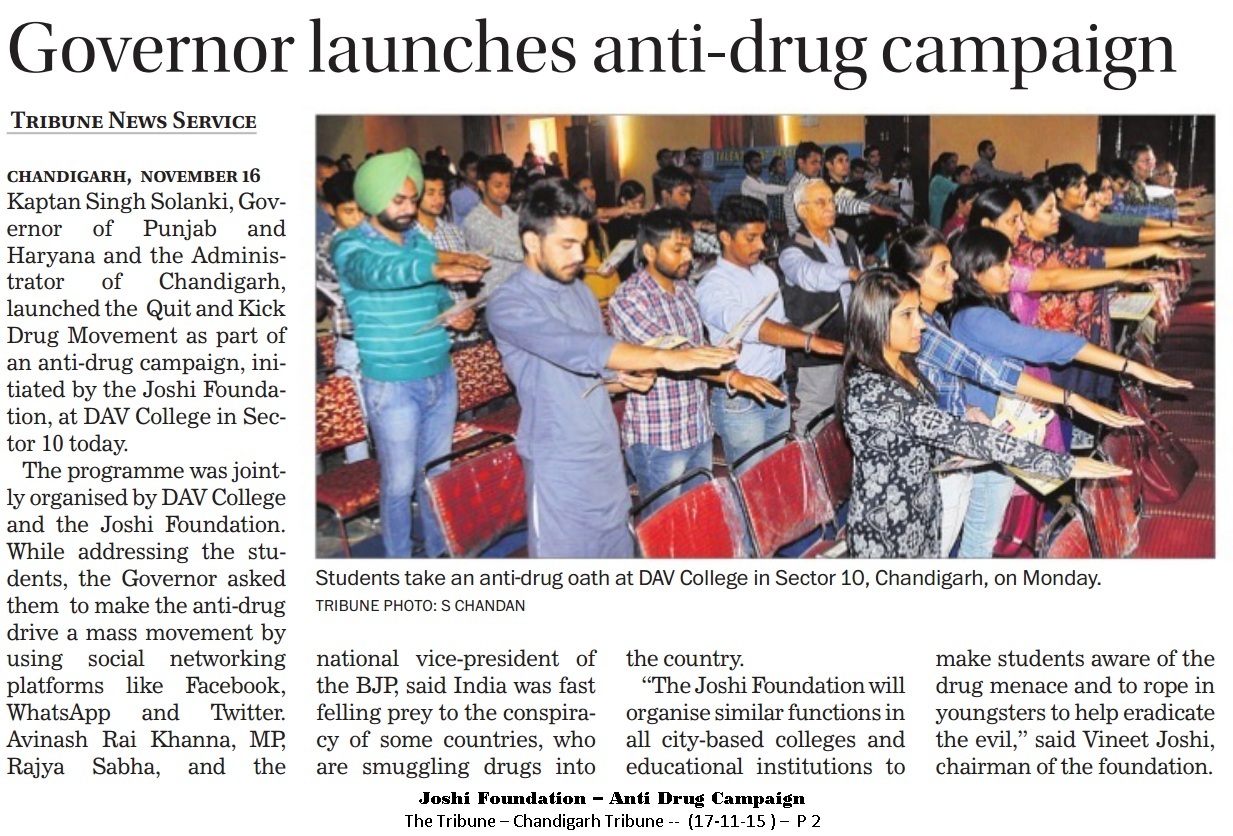 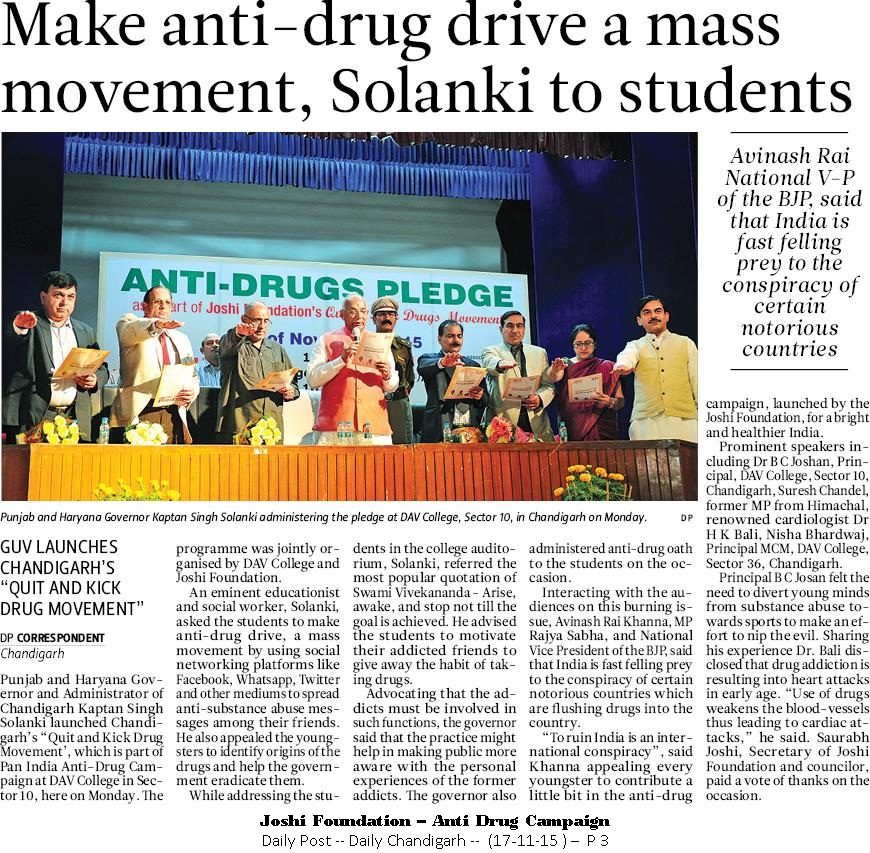 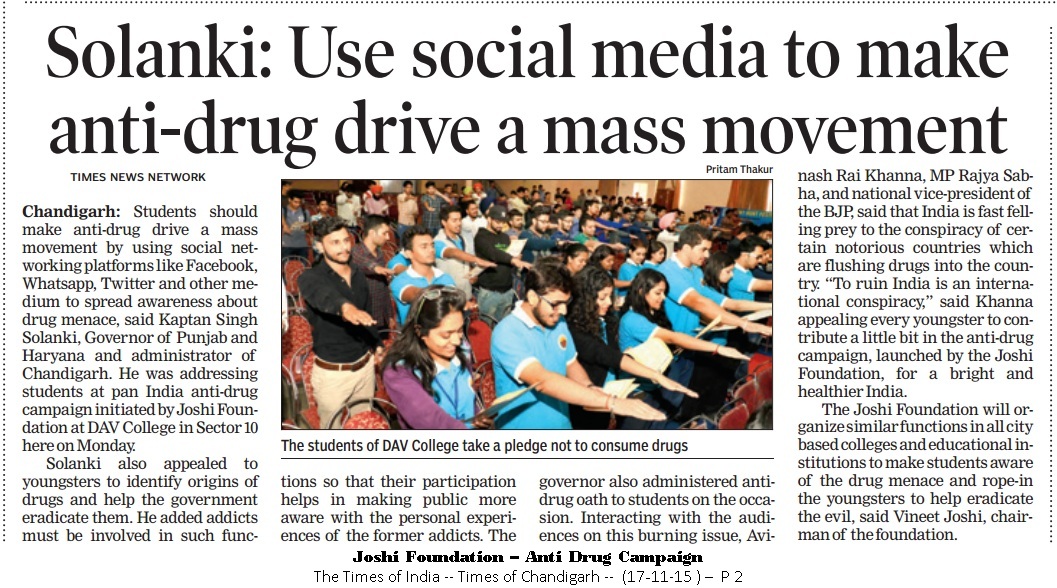 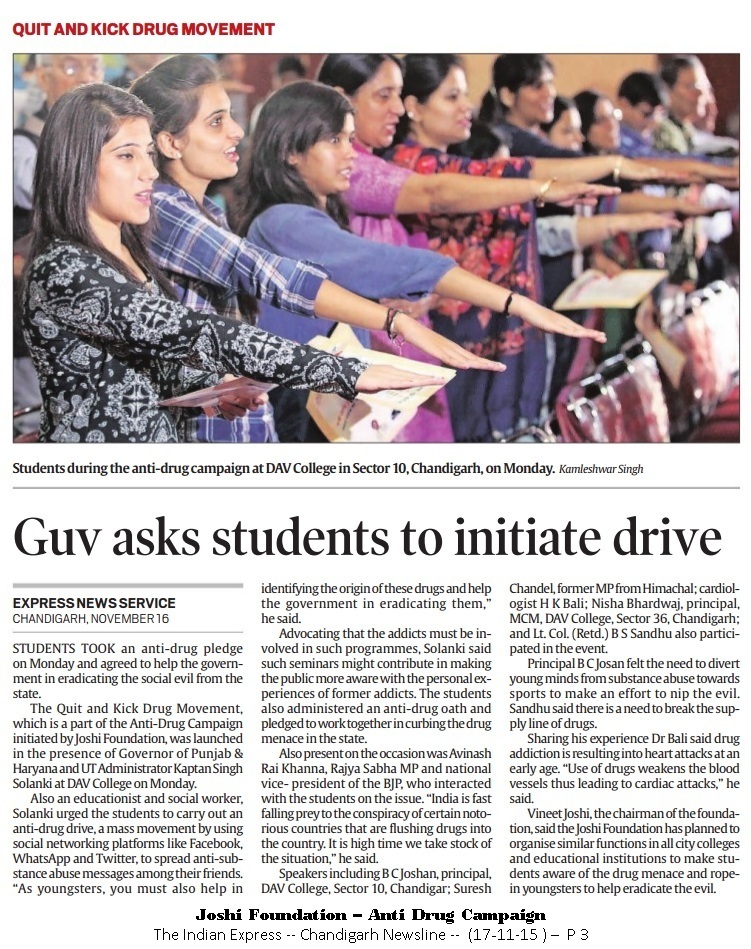 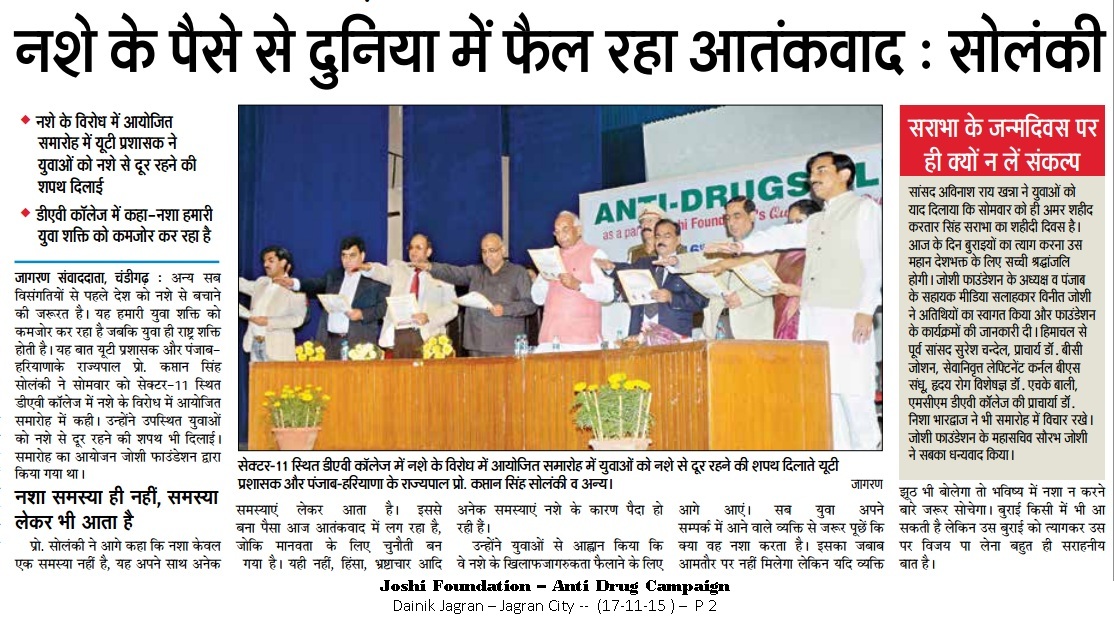 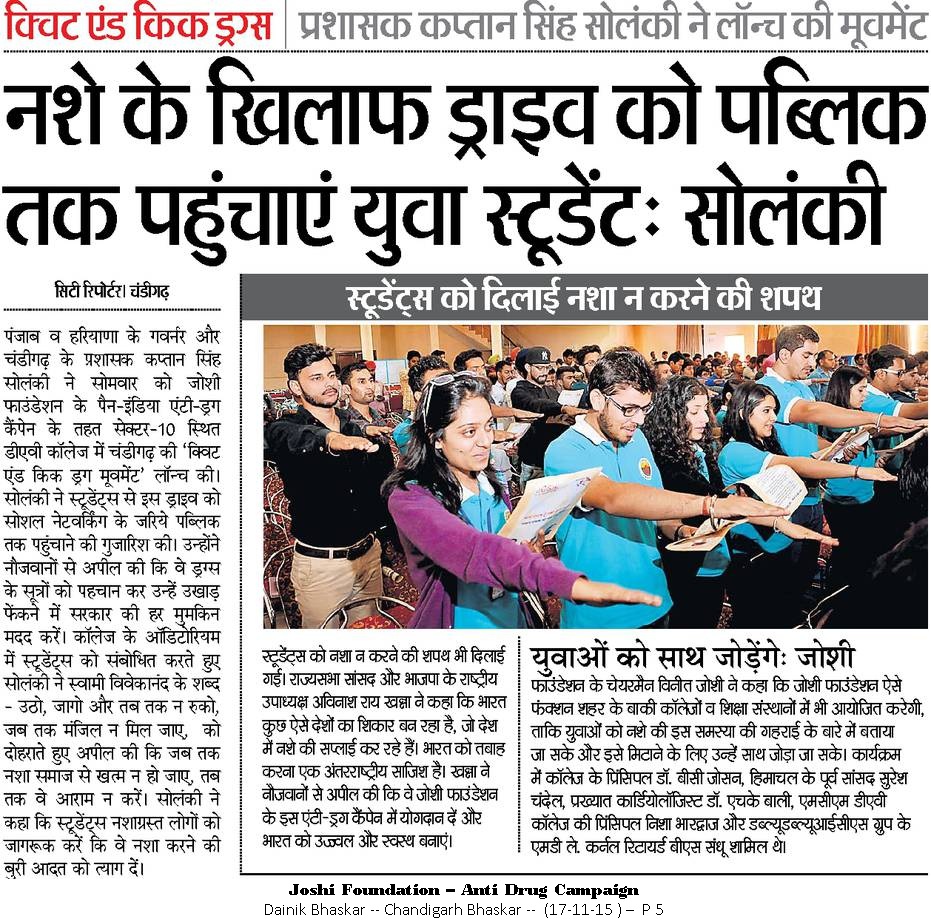 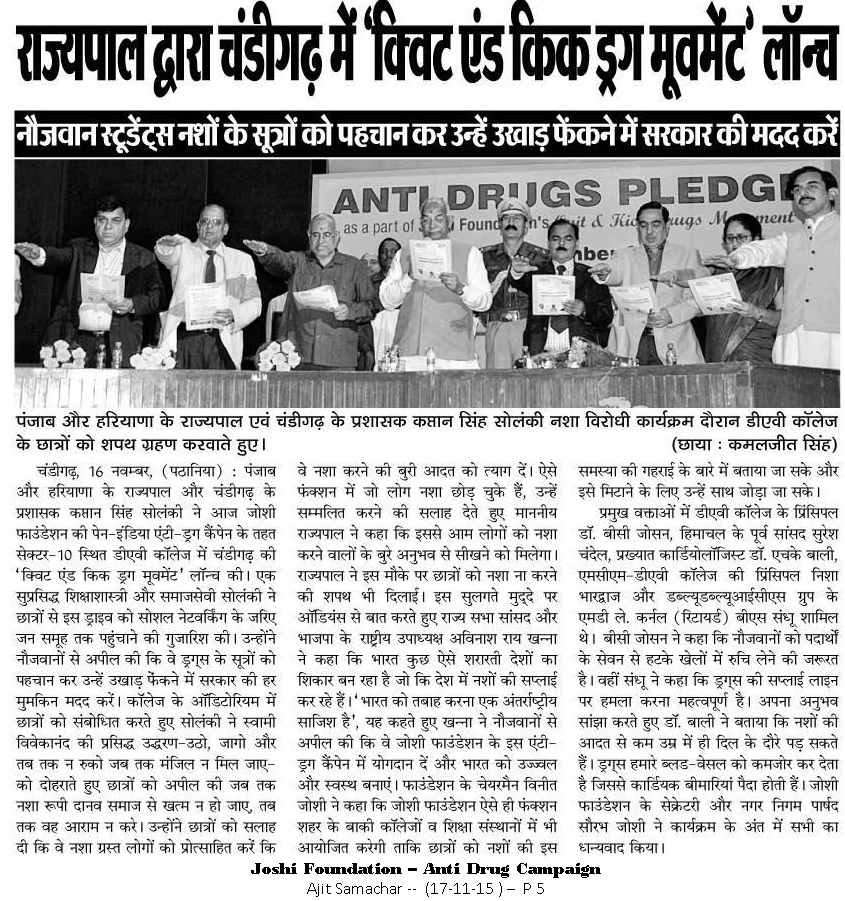 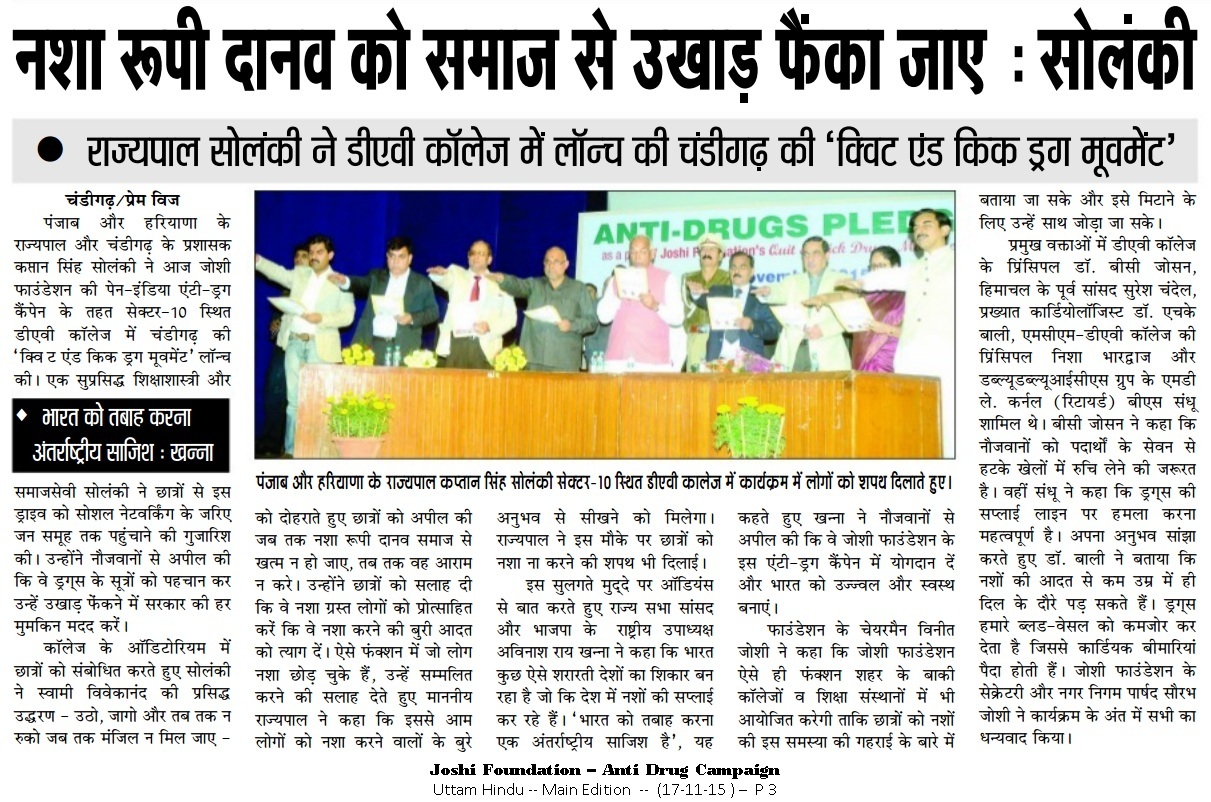 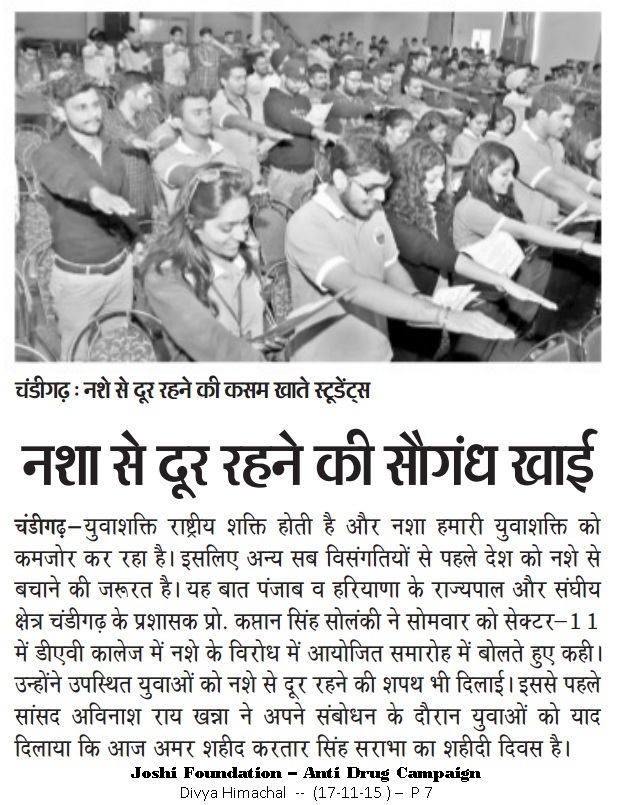 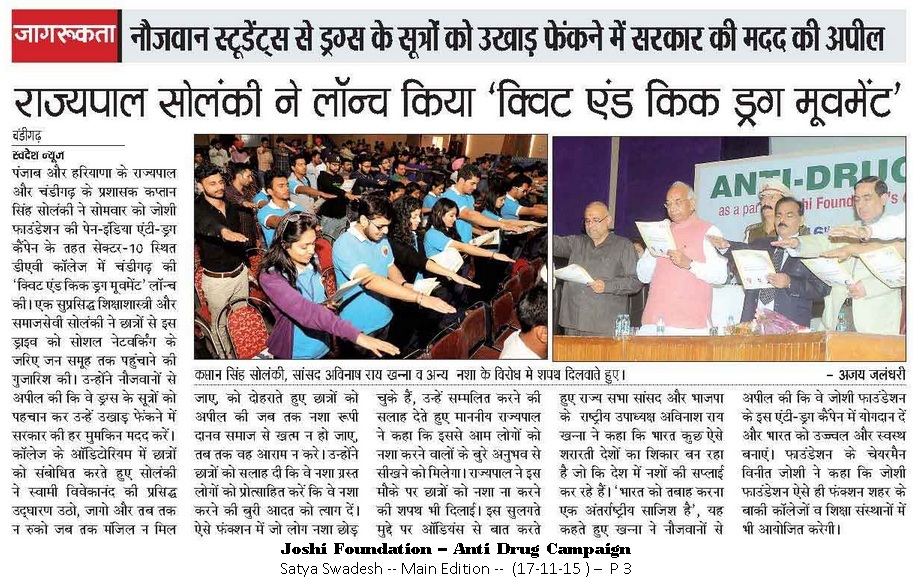 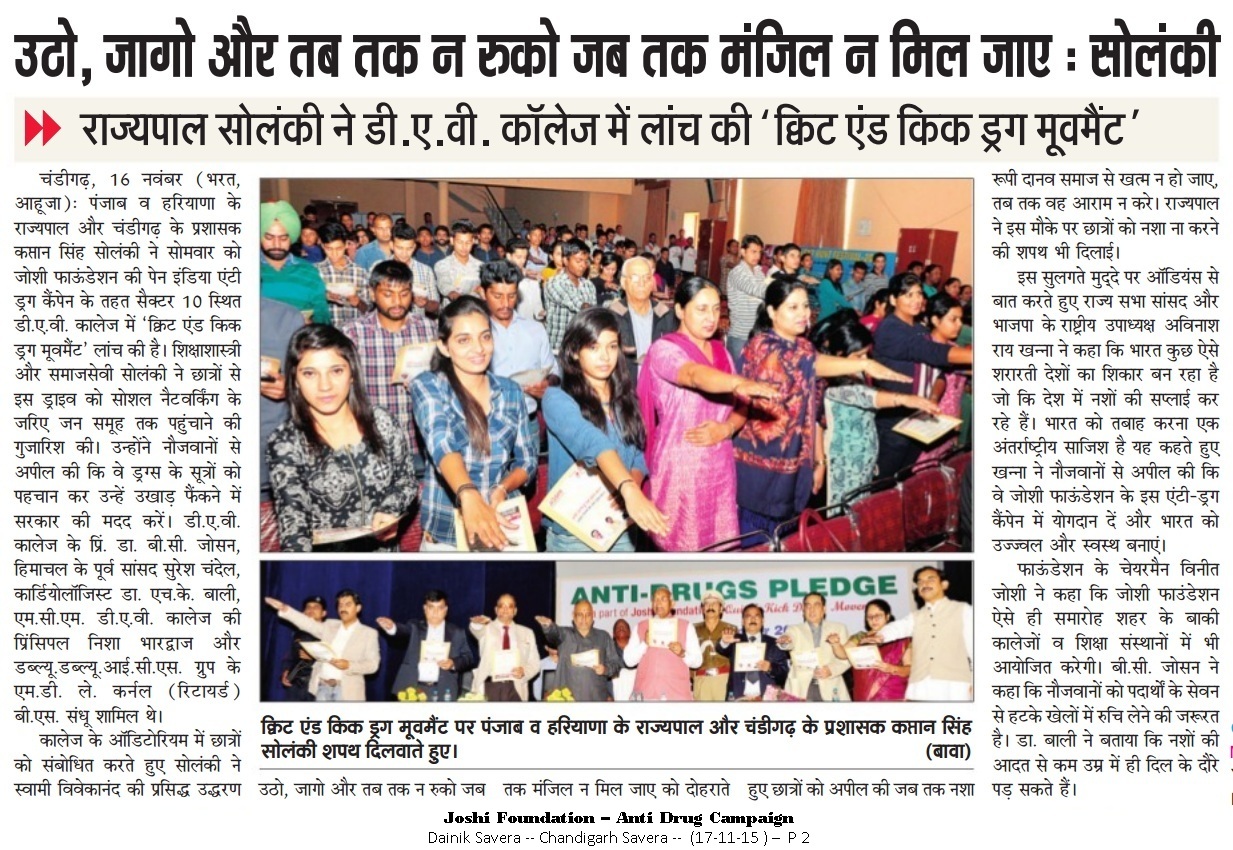 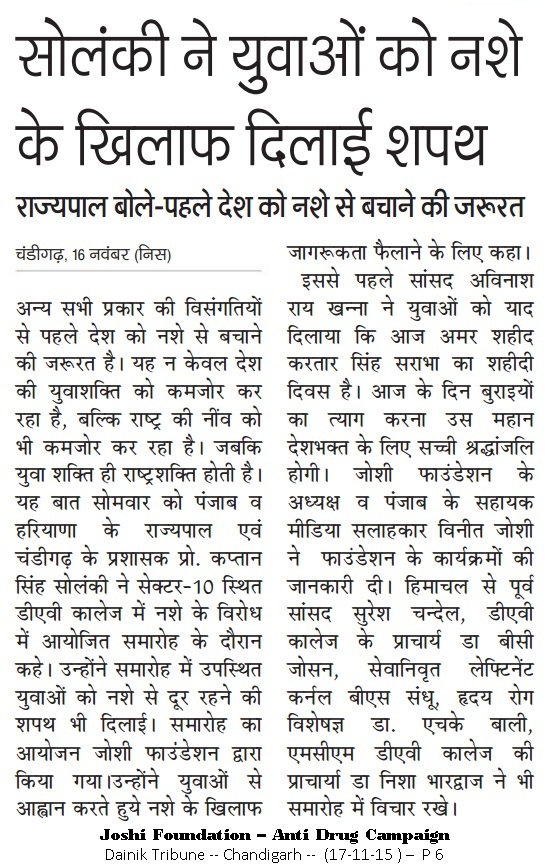 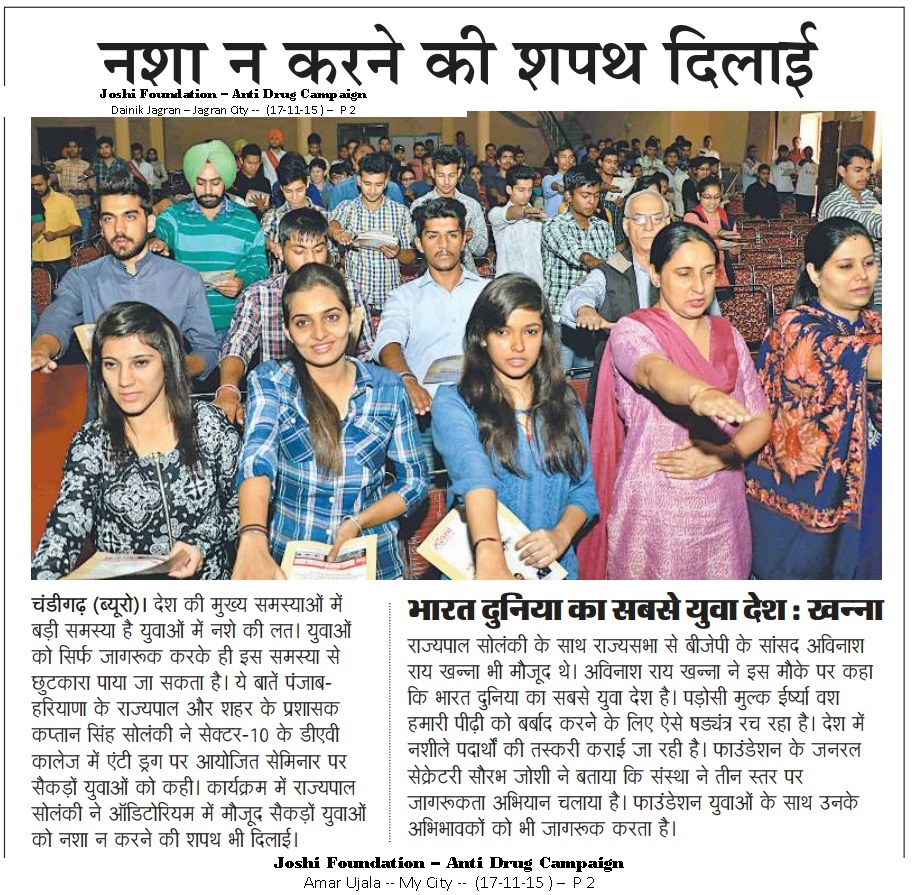 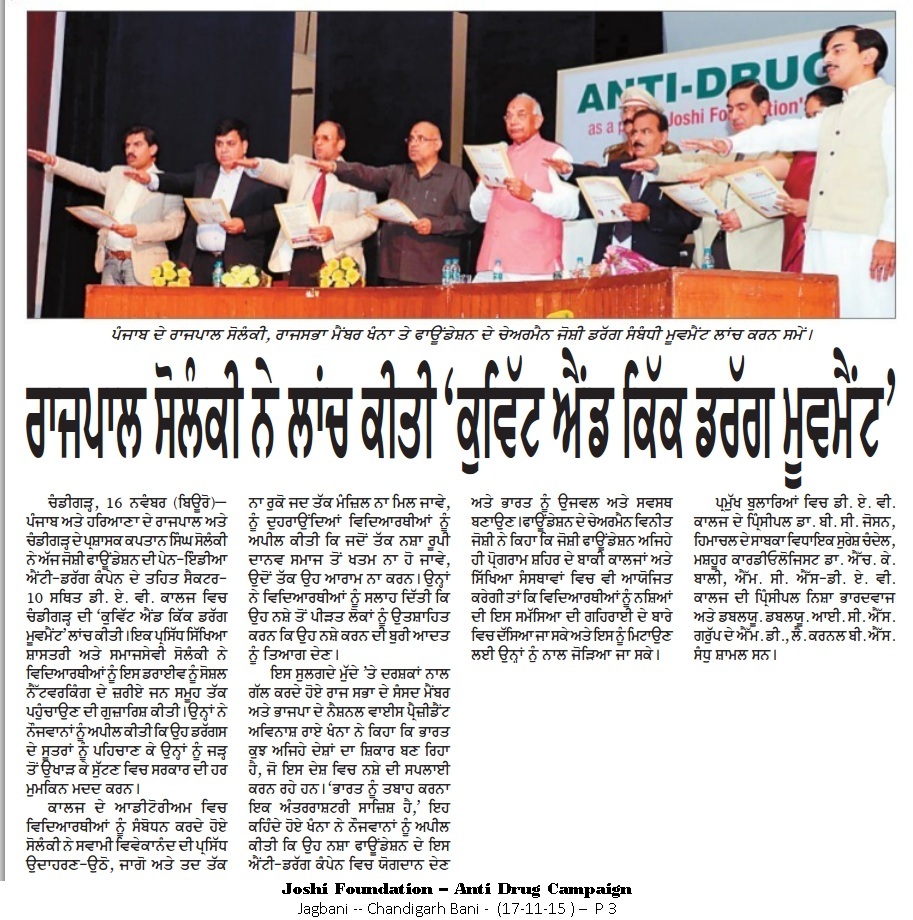 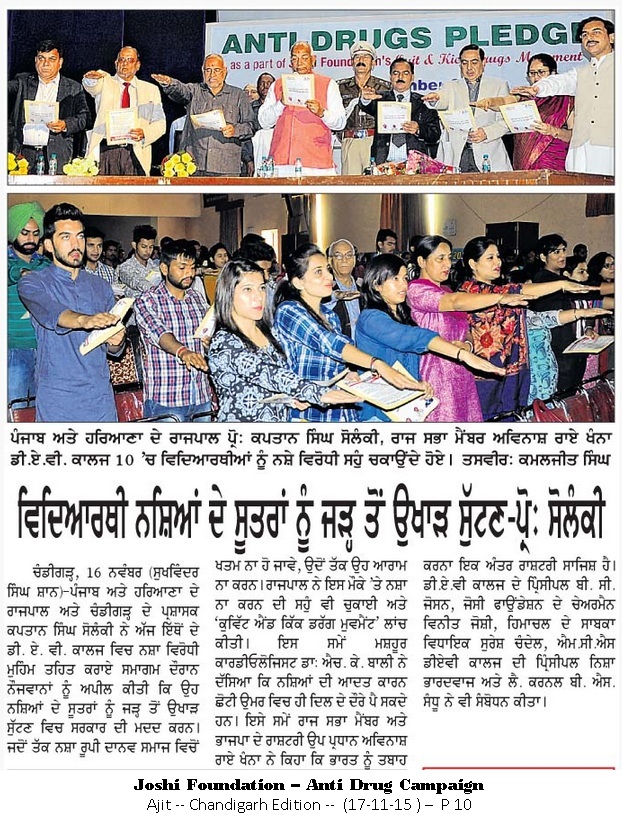 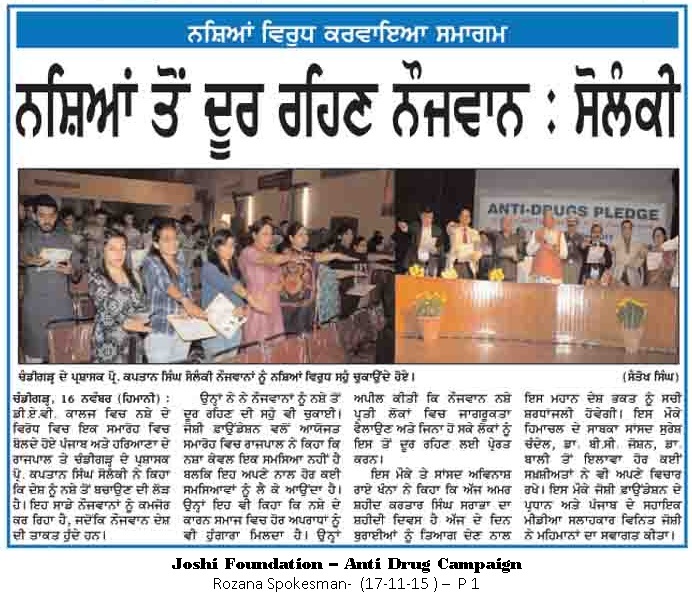 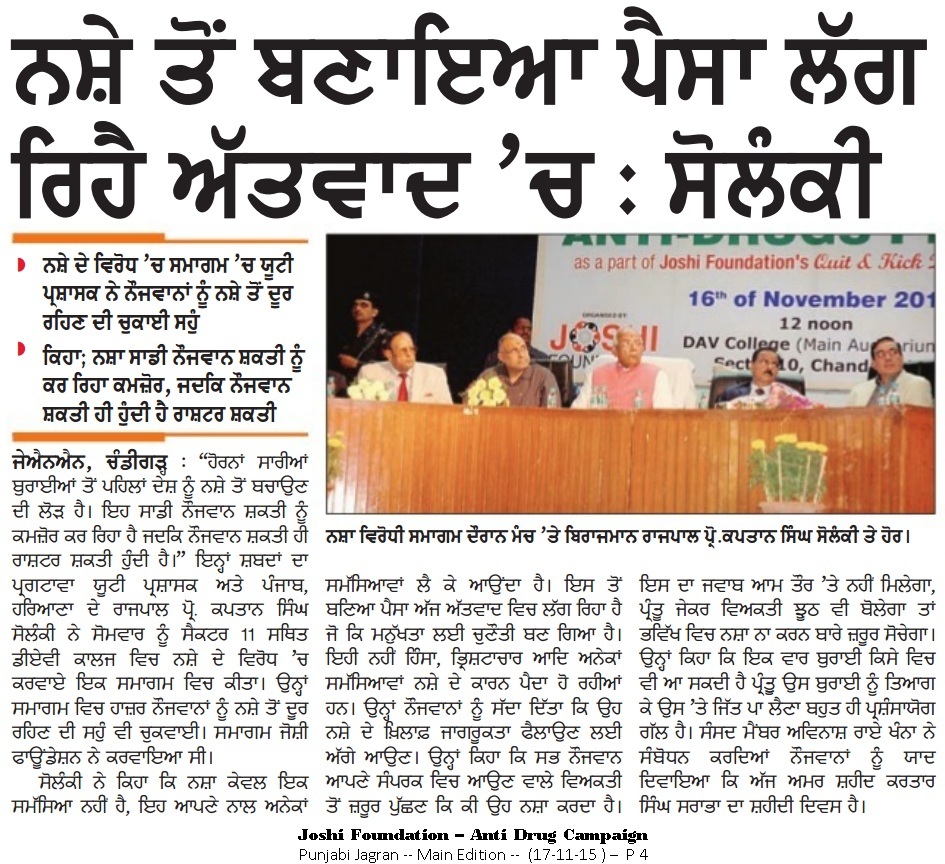 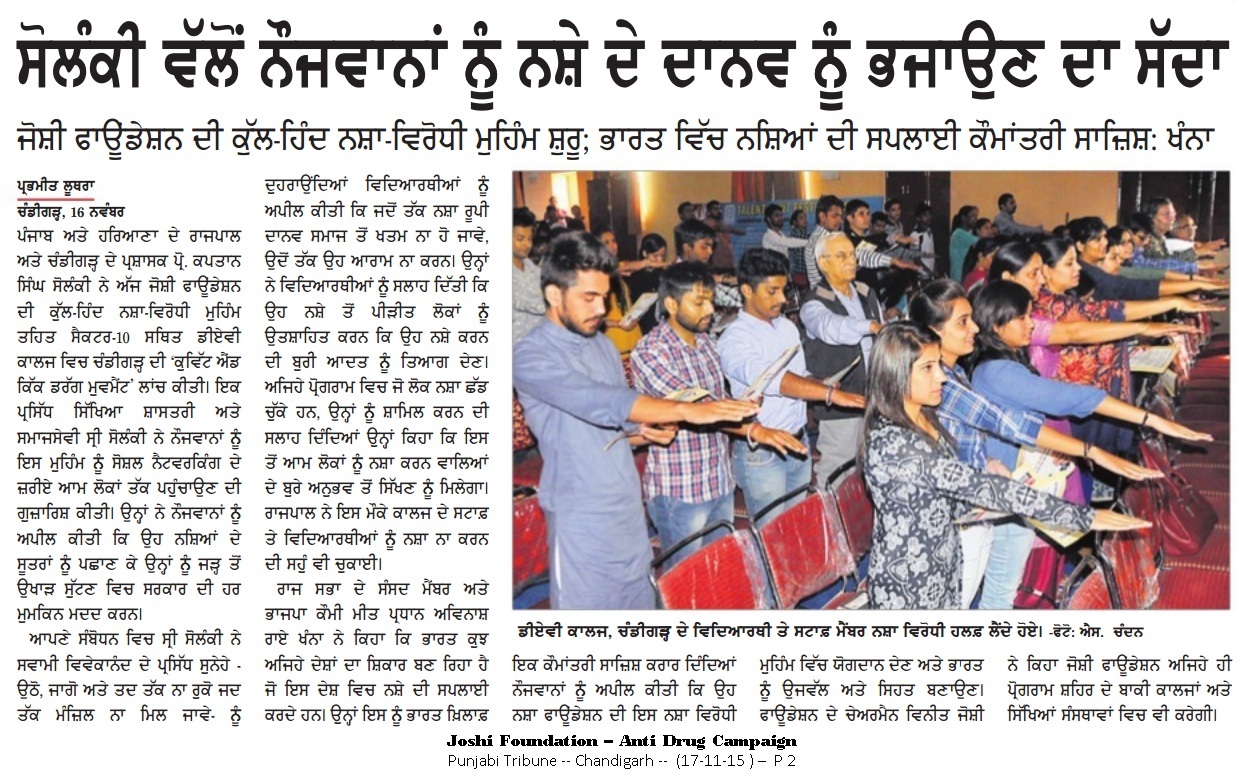 An eminent educationist and social worker, Solanki, asked the students to make anti-drug drive, a mass movement by using social networking platforms like Facebook, WhatsApp, Twitter and other mediums to spread anti-substance abuse messages among their friends. He also appealed the youngsters to identify origins of the drugs and help the government eradicate them.

While addressing the students in the college auditorium, Solanki,  referred the most popular quotation of Swami Vivekananda – Arise, awake, and stop not till the goal is achieved. He advised the students to motivate their addicted friends to give away the habit of taking drugs.

Advocating that the addicts must be involved in such functions, the governor said that the practice might help in making public more aware with the personal experiences of the former addicts. The governor also administered anti-drug oath to the students on the occasion. Interacting with the audiences on this burning issue, Avinash Rai Khanna, MP Rajya Sabha, and National Vice President of the BJP, said that India is fast felling prey to the conspiracy of certain notorious countries which are flushing drugs into the country.

“To ruin India is an international conspiracy”, said Khanna appealing every youngster to contribute a little bit in the anti-drug campaign, launched by the Joshi Foundation,  for a bright and healthier India.

The Joshi Foundation will organize similar functions in all city based colleges & educational institutions to make students aware of the drug menace and rope-in the youngsters to help eradicate the evil, said Vineet Joshi, Chairman of the foundation.

Principal BC Josan felt the need to divert young minds from substance abuse towards sports to make an effort to nip the evil. While Sandhu, said that there is a need to break the supply line of drugs.  Sharing his experience Dr. Bali disclosed that drug addiction is resulting into heart attacks in early age. “Use of drugs weakens the blood-vessels thus leading to cardiac attacks,” he said. Saurabh Joshi, Secretary of Joshi Foundation & Councillor, paid a vote of thanks on the occasion.